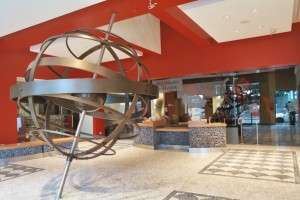 The main ticketing area: A strong contrast to the outdoor environment, whilst utilising traditional materials

In 2003, around about the time that I joined Jonathan Rounce at Petersham Group, we met with directors of Blandy Group, the Madeira-based tourism services to publishing group who set out their vision to create a visitor attraction telling the story of the history and people of the wonderful island of Madeira. A rich and varied history featured pirates, Austrian Empresses, explorers, scientists and even Napoleon, as well as the development of a unique style of wine, traditional arts and crafts and some of the first overseas holidays taken by Europeans in the modern age by ship and seaplane to grand hotels such as the famous Reid’s Palace.

After initial work to assess the opportunity and comment on the feasibility study, we were appointed as project directors and coordinators for the development and subsequent operation what was to become the new ‘Madeira Story Centre’.

The attraction tells the story of the history and culture of this beautiful island in an interactive, entertaining and informative way. It uses a wide range of media, from physical and IT-based interactives through to costumed guides, ‘smell boxes’, models and real artefacts.

A private investment with a capital budget of €7million, supported by €3million of grant funding, the project occupies a pair of listed buildings, formerly a cinema and a grain warehouse, in the old town area of Funchal.

We were retained by Blandy Group to work with them to see the project through planning, design, development and fit out, and then to launch it into the market. Our responsibilities included selecting, briefing and managing the specialist exhibition and retail designers Haley Sharpe Design on the client’s behalf and ensuring that the designs that were developed matched both client and market requirements (this was also the start of a long-standing and mutually beneficial relationship with Haley Sharpe, who we have worked with on many projects since). Subsequently we undertook the training of the operational management team, development of the opening marketing strategy, implementation of operating and management control systems (including ticketing and EPOS for the shop and café) and assembling a retail merchandise range. We worked closely with the team to manage the opening of the attraction and subsequently delivered a programme of long-term management assistance to the local team.

The Story Centre opened in May 2005 and despite the occasional set back such as inundation by the floods of early 2010, went on to establish itself as one of the leading tourist destinations of Madeira, with strong ratings on TripAdvisor. In 2015, the Story Centre changed hands and the new owners invested further, including the development of a well-received restaurant on the top floor, a decked area giving wonderful views out to sea, and with the famous ‘Teleférico do Funchal’ the cable car linking sea front to mountain, flying overhead. We hope that it will continue to be as popular as ever and one of many reasons to visit the island.