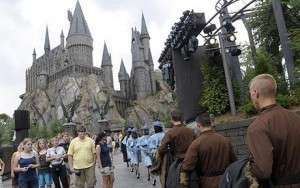 Thanks firstly to my good friend Jean-Paul Haenen at Kwan Leisure for drawing attention to a piece by Bloomberg Online columnist, Justin Fox, entitled ‘Theme parks will not be Digitized’ where Fox notes that for the world’s entertainment giants, this is a time of fear and doubt, with the inexorable rise in digital forces that have decimated the publishing and recorded music businesses now starting to cause shivers in the TV and Film industry too.

One reaction to this has been the move by such companies to mitigate these effects by moving into Disney’s territory and buying into the location-based entertainment sector as illustrated powerfully by Comcast’s decision to spend $1.5 billion on a majority stake in the Universal Studios Japan theme park, the company’s biggest-ever overseas acquisition. At Disney, meanwhile, theme parks continue to account for a third of all revenue with theme park operating income up 16 percent in the nine months ending June 27. Just as Universal has benefitted from the dramatic effect of the Wizarding World of Harry Potter at Universal Studios Florida (Universal’s theme park operating cash flow was up 48.9 percent in the first half of this year), Disney no doubt expect similarly great things from their new Star Wars attractions when they come on stream. Certainly, the abilities of these companies to stretch their IPs across all channels is legendary and a lesson for all operators. Meanwhile, Merlin Entertainments continues its remorseless expansion with the Lego brand at the heart of its drive, as well as a great focus on properties with high public recognition such as Madame Tussauds. Since emerging from bankruptcy in 2011, stocks in Six Flags have out-performed the market but they too benefit from the characters that they license from Time-Warner (who were their owners of course from 1993 to 1998).

To slightly paraphrase a key point in Fox’s article, the companies that have been doing well lately, are in the business of creating magical, branded experiences that people are willing to pay a huge premium for rather than those just in the roller-coaster business. Our experience at Petersham Group is that at every level of the industry, whether theme parks, midway attractions or local attractions, it is infectious, memorable and most of all, real experiences that have the most resilience in the face of digital and in-home entertainment. Digital technology plays a vital role in allowing us to push the boundaries of what we can do in our industry but in most successful concepts, its part of the package, not the main feature.

So, whether it’s riding the latest coaster at Disney, completing a quest at Boda Borg, encountering sting rays at a Sea Life Centre or conquering a climbing wall at a Clip ‘n Climb, I’m with the ‘giants’ and I believe that entertainment businesses centred on great quality, real experiences will remain digital proof.