Opening soon in Wroclaw, Poland at the Zoo Wroclaw will be the brand new Afrykarium Oceanarium.  The building, a black concrete monolith, houses five distinctive halls that each depict aspects of the ecosystems of the rivers, lakes and Oceans around Africa. Designed by local studio arc2 fabryka projektowa and owned and operated by the Zoo Wroclaw, the construction budget of the Afrykarium was 220 million Polish Zlotys (€48 million, $60 million). The Afrykarium is a three-storey building, including one underground level, 160 m long, 54 m wide and 12-15 m high. It was built on an area of nearly 1.9 ha and its total volume equals over 184,000 m3. Usable floor area of the pavilion is about 9,000 m2, utility area equals about 7,000 m2, and outdoor exhibitions occupy the area of nearly 7,500 m2. 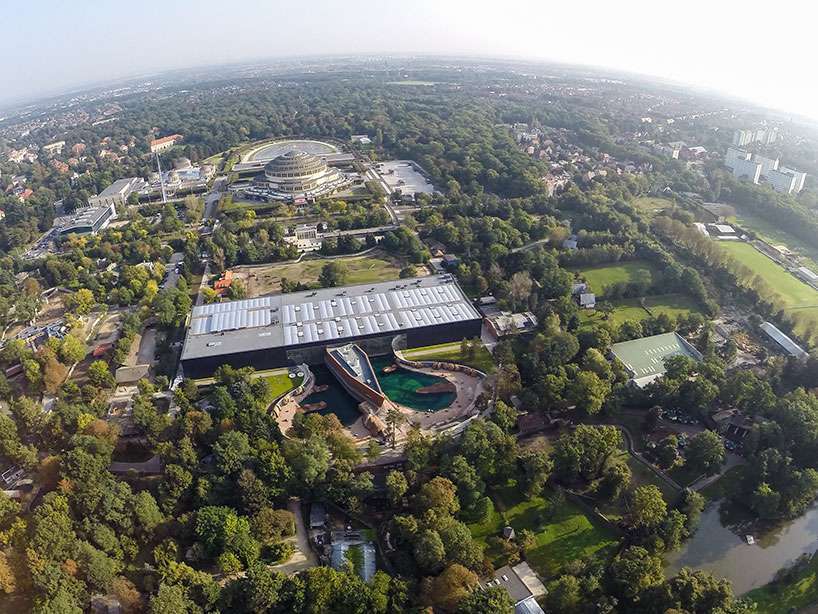 Displays in the Afrykarium include a Red Sea coral reef, hippos and freshwater fish of Malawi and Tanganyika lakes.

The largest tank shows the depths of the Mozambique Channel, where sharks, rays and other large pelagic fish live. These can be viewed form an 18 m long underwater, acrylic tunnel. An exhibition will also be devoted to the Skeleton Coast in Namibia, with penguins and brown fur seals.

A further area shows the jungle surrounding the rivers of the Congo and will be inhabited by crocodiles, and manatees.

In the whole Afrykarium water system, comprising aquarium exhibits, filters, reservoirs and pipelines, there is a total of 15,000,000 litres of water in circulation (15,000 m3). Rate of exchange of the volume of water in each of the aquaria is estimated at about one hour. To “salt” The Red Sea basin and produce sea water, it is estimated about 140 tonnes of salt is required.

The volume of each main aquarium or exhibition tank is as follows:

A soft opening is currently underway while the project is completed and ultimately, the Afrykarium will form an integral part of the Zoo Wroclaw visit.